I am inspired to blog about Jill Kiedaisch’s post in which she talked about acoustic engagement. I can see its direct relevance for expanding the use of the blogging tool to capture learner experiences.

The question she poses is this:

Can we effectively engage people by talking about the sounds of their towns, their homes, and what it would be like to live in them if those sounds disappeared or were replaced by something else entirely?

I would find it very hard to describe all the sounds taken for granted. I was reminded how the sounds around you do indeed shift your mood, and have some impact on your person. I remember being startled to hear sounds I had not heard before when I was first living in Northwest BC. I could not distinguish between the cries of eagles, ravens and crows, for example.

It felt 0dd to live in relative silence, in the absence of city sounds I grew so used to. I was startled to hear the heavy wooomping sounds of flapping wings as a raven sailed a few feet overhead. I was also startled to hear the talk of the ravens, the squishy spongy sounds of my footsteps as I walked across kelp beds at low tide.

Through Twitter, I learned about the Cornerstones blog thanks to Barbara Ganley’s tweet. The topic covers the concept of “acoustic engagement”, a theme loosely connected to some of my own thoughts on walk-talk blogging.

Several ideas from the comments thread also intrigued me:

Barbara Ganley’s  “soundscape” which described the focus of our hearing to a specific situation to be aware of ambient, background noise, and to be present to these sounds all around us.

…we can forget to connect with the soundscape as a critical component of place. Learners need to learn to share and “…talk about the sounds of place, and experiment with capturing the ambient sounds of the streets, the neighborhoods and the great outdoors. (Italics mine)

I’m certain my visual experience of place is affected by what I’m listening to. I used to blindfold my English students and make them write “observation essays.” The results were always compelling and wildly creative, not to mention entertaining! It’d be interesting to see how receptive other age groups would be to this kind of seeing.

Based on this post, I am considering ways of working with my literacy learners to engage in acoustic engagement. One possible technique is the observation essay, in which I ask my learners to develop read-aloud texts, accompanied by recordings of the ambient sounds they are describing.

I will follow-up on another blog, called BLDBlog, which was mentioned in Jill’s post. In particular, I will first examine the post titled BLDG Blog – Sound not as memory but experience.

In addition, I am going to consider ways of designing learning activities for adult literacy learners to describe photos as “sensory snapshots”, describing their experiences surrounding the event, in terms of emotions, reactions, and the four senses.

Here is a preliminary example that begins the sensory snapshot, based on my very recent experience of having fish-heads for lunch: 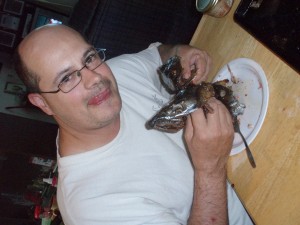 first-time ever for me

how do I eat this?

lick the oil from my fingers

ravens get the eyes, wolves get the brains, bears get the body – the remains feed the trees – no waste

Note to audience: I have started with highlights so the memory will have less chance of fading, and I can return later to build up the details and add more flesh to the bare bones of the account.

Identity Building for ESL Learners: Using your Blog to Build your Portfolio